A variable- (also changeable, electronic, or dynamic) message sign, often abbreviated VMS, CMS, or DMS, and in the UK known as a matrix sign,is an electronic traffic sign often used on roadways to give travelers information about special events. Such signs warn of traffic congestion, accidents, incidents, roadwork zones, or speed limits on a specific highway segment. In urban areas, VMS are used within parking guidance and information systems to guide drivers to available car parking spaces. They may also ask vehicles to take alternative routes, limit travel speed, warn of duration and location of the incidents or just inform of the traffic conditions.

VMS's were deployed at least as early as the 1950s on the New Jersey Turnpike. The NJ Turnpike's signs of that period, and up to around 2012, were capable of displaying a few messages in neon, all oriented around warning drivers to slow down: "REDUCE SPEED", followed by a warning of either construction, accident, congestion, ice, snow, or fog at a certain distance ahead. The New Jersey Turnpike Authority replaced those signs (along with 1990s-vintage dot-matrix VMS's along the Garden State Parkway) with more flexible electronic signs between 2010 and 2016.

The current VMS systems are largely deployed on freeways, trunk highways, or in work zones.

On the interchange of I-5 and SR 120 in San Joaquin County, California, an automated visibility and speed warning system was installed in 1996 to warn traffic of reduced visibility due to fog (where tule fog is a common problem in the winter), and of slow or stopped traffic.

Message Signs were deployed in Ontario during the 1990s in the Greater Toronto Area and are now being upgraded on 400 series Highways in the GTA as well as two pilot secondary highways in northeastern Ontario. 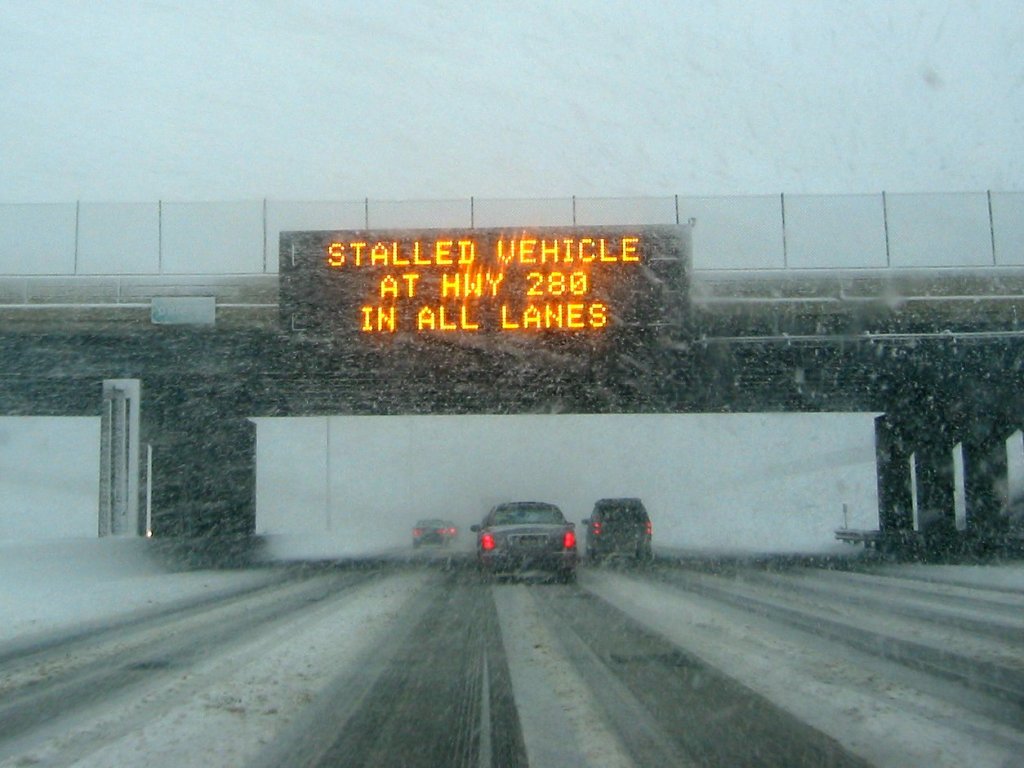 The NJ Turnpike Authority counts five unique types of variable message signs under its jurisdiction, at least one of which has been replaced by newer signs.They are:
1. "REDUCE SPEED" neon signs (1950s-2010, obsolete, have been replaced).
2. "Changeable message signs" (trilon/ rotating-drum signs that can be used for closing roads or moving traffic to other roadways).
3. Electronic VMS: signs with remotely controlled messages displayed on them; the messages are sent from the State Traffic Management Center, updating the signs automatically.
4. Variable speed limit signs - used for varying the posted speed limits within work zones and in emergencies.
5. Portable VMS: movable "electronic VMS". A portable VMS has much the same characteristics as a fixed electronic VMS, but can be moved from location to location as the need dictates.

Early models required an operator to be physically present when programming a message, whereas newer models may be reprogrammed remotely via a wired or wireless network or cellphone connection.

A complete message on a panel generally includes a problem statement indicating incident, roadwork, stalled vehicle etc.; a location statement indicating where the incident is located; an effect statement indicating lane closure, delay, etc. and an action statement giving suggestion what to do traffic conditions ahead. These signs are also used for AMBER Alert and Silver Alert messages.
In some places, VMSes are set up with permanent, semi-static displays indicating predicted travel times to important traffic destinations such as major cities or interchanges along the route of a highway.

The information comes from a variety of traffic monitoring and surveillance systems. It is expected that by providing real-time information on special events on the oncoming road, VMS can improve motorists' route selection, reduce travel time, mitigate the severity and duration of incidents and improve the performance of the transportation network.

Truck-mounted VMSes are sometimes dispatched by highway agencies such as Caltrans to warn traffic of incidents such as accidents in areas where permanent VMSes aren't available or near enough as a preventive measure for reducing secondary accidents. They are often deployed in pairs so that the second VMS truck can take over when the traffic queue overtakes the first truck, requiring the first truck to reposition further upstream from the queue, to be effective. An optional third truck, the team leader, may be utilized for driving by and monitoring the incident itself, traffic patterns and delay times, to make strategic decisions for minimizing delays—analogous to spotter planes used in fighting forest fires.

Trailer-mounted variable-message signs are used to alter traffic patterns near work zones, and for traffic management for special events, natural disasters, and other temporary traffic patterns. The messages displayed on the sign can be programmed locally on the unit's control panel, or units equipped with a cellular modem can be programmed remotely via computer or phone. Most manufacturers produce trailers which comply with the National Transportation Communications for Intelligent Transportation System Protocol (NTCIP) which allows the portable trailer to be integrated with an intelligent transportation system. Trailer-mounted VMS can be equipped with radar, cameras, and other sensing devices as part of a smart work zone deployment..